Wonder, let his death help save others

There are some days when I think rescue is more than I can handle. 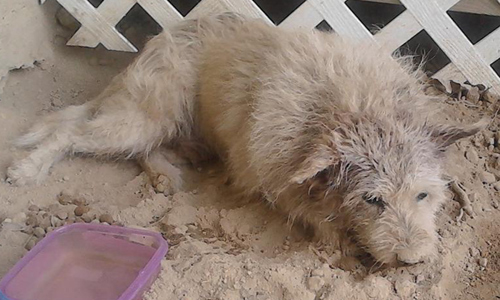 There are some days when I think rescue is more than I can handle. I found myself having one of those days yesterday. Don’t get me wrong, everyday is tough, but it isn’t the constant struggle to keep afloat financially, it isn’t the exhaustion, it isn’t the strange looks or comments I get from folks who “just don’t get” why I do what I do 365 days a year that make me think I will collapse. It is the senseless pain and suffering that remains out of my control which carves a hole deep in my heart creating a pain so deep that it takes my breath. It is then that I wonder how much more can I see and remain sane.

Every day in “real” rescue you deal with sad, senseless situations. You are burdened but seeking solutions.

Every day in “real” rescue you deal with sad, senseless situations: unwanted litters of puppies and kittens dumped at shelters or on back roads, senior dogs suddenly “too much burden for their lifelong owner” dumped at the pound, animals chained and daily walking in circles of their imprisonment breathing their own feces and urine, thin flea and tick ridden animals scratching in their yards with no help from the owners out polishing their cars oblivious to the suffering of their own pets. These things are a daily scene and although VERY troubling as a rescuer, you expect these and try to figure out the answer. You are burdened but seeking solutions.

Yesterday’s ordeal had no solution.

Yesterday’s ordeal had no solution. There was no amount of planning that could correct the pain. There was no happy ending; only flashes of scenes I knew had to have happened leading up to a sad, senseless death of an angel carelessly placed in the wrong hands. His being placed in those hands lead to days of anguish and suffering before we were able to step in.

Sunday morning my phone rang and I was told of this precious 20 pound baby who was lying alone, abandoned, and suffering immensely.

Sunday morning my phone rang and I was told of this precious 20 pound baby who was lying alone, abandoned, and suffering immensely. His condition told us he had been abandoned several days if not longer. He lay with no shelter in these August days which have been filled with flash floods and humidity. His little body was painfully thin, covered in mud, and injured resulting in a horrific gangrene infection in his neck and legs (if you don’t know, gangrene is excruciatingly painful). He was too weak to move, but gratefully drank the water he was offered as he was gently picked up and rushed to an emergency call at the vet. I catch myself stepping into his little paws and realizing he surely had given up and was simply lying there waiting for his little body to shut down finally freeing him from what man had inflicted. My mind could not help but wonder as he was being taken to the vet with gentle voices around if on some level he felt a bit of hope OR had he been so neglected and tossed aside that the kind human hands helping him were feared?

Once examined by one of the kindest, soft spoken vets I have had the privilege of knowing, it was determined that  sweet “Wonder” (named thusly because it was a wonder he was even still breathing), had gangrene in his neck, and legs (caused by infected injuries), kidney failure, liver failure, and was dying a slow painful death. Then and only then did we make the decision to help him cross over the bridge. My heart simply shattered….I wanted to bring the responsible person (whom we will never know) to see what they had they had caused, and I must be honest and admit a part of me wanted them to suffer the same pain (Lord forgive me). As I try to recount this senseless travesty done to an innocent dog who was once a puppy frolicking and deserving of a loving, long life, I am crying again. My only prayer is that somewhere, somehow this will strike a chord with someone who might otherwise not be sensitive to the innocent four legged creatures placed in our lives or who cross their paths.God rest you precious Wonder.You were loved at the end and I hope to see you again some day. Meet me there,buddy and God give me the strength to keep rescuing.

My only prayer is that somewhere, somehow this will strike a chord with someone who might otherwise not be sensitive to the innocent four legged creatures placed in our lives or who cross their paths.

Lavonne and her staff  are “dedicated to saving the lives of as many animals as possible and placing them in loving homes. Proverbs 12:10 placed over 650 pets into forever homes since 2009 and averaged 500 placements a year for the previous five years.  That is only a drop in the bucket, but for the animals that have been spared, “it is a very important drop“. They are making a difference in the lives of animals in Nashville. “Although there are sad endings – we see so many more HAPPY ENDINGS. We have dedicated our SUCCESSFUL ADOPTIONS and HAPPY TAILS pages to these happy endings and invite you to read their stories.”

If you are interested in submitting a story, please visit our share a story page. We welcome any inspiring or funny stories involving pets or their advocates.