La Porte police officer shuts down highway to save dog 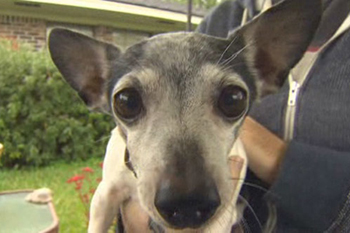 All Content and Photos Courtesy of KHOU.com Houston, Texas

LA PORTE, Texas — A police officer in La Porte helped save a dog that was in trouble on a busy freeway on Monday, and now the story has gone viral on the Internet.

Cujo’s a jittery rat terrier with a bad hip who spends his days hanging around his house in La Porte; but, that all changed on Monday.

“I would describe him as a Napoleon-type of dog,” said Jeremy Zapalac, one of his owners. “He’s very short, but with a very big ego.”

Still, it was surprising when Cujo ducked out of an open door Monday morning and wandered away from home. The Zapalac family spent much of the day searching their neighborhood, calling in help from relatives to scour the area for their missing pet. 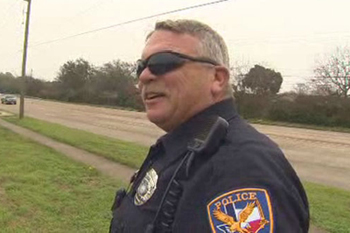 “We spent the whole morning, about an hour, looking for him,” Zapalac said. “It started pouring down rain. And he hates water.”

As it turned out, Cujo drifted all the way up to Spencer Highway, a short drive in a car, but a long walk for a little dog with a hip that forces him to toddle around with a slight waddle. Somehow he crossed the busy road and started walking in a moving lane of traffic.

Cujo’s story might have ended right then and there, but the shivering pooch caught a lucky break.

“He’s not going to make it if I don’t do something,” said Kyle Jones, a La Porte police officer who happened to be driving by.

Jones made a quick decision: He spun his car around and blocked traffic on the busy highway to save the life of a lost dog.

“When I saw it and saw the size of it, I immediately hit my lights and shut all the lanes off,” Jones said.

The officer stepped out of his patrol car and bent over, calling out to the dog.

“You know how Chihuahuas are,” Jones said with a chuckle. “You’re not really sure if you can trust ‘em or not. But he kind of looked at me and said, ‘Man, I’m glad you’re here.’ He let me pick him right up. Stuck him in the back seat of the patrol car.” 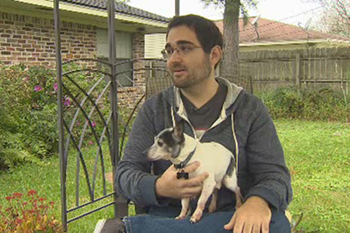 Little did Jones know that someone was snapping a photo that has gone viral on Facebook, drawing thousands of comments praising the officer’s simple act of kindness.

“He was all wet,” Zapalac said. “He was soaked. We got him in wrapped him up, dried him up and he just slept in his bed all day.” 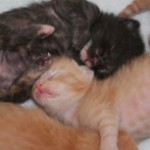 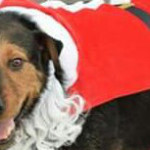